“Enisei” in a bitter struggle lost the home match of the VTB United League against “Lokomotiv-Kuban” – 85:86.
In the third quarter “Enisei” let the opponent to have advantage of 13 points, but inspired by Vladimir Pichkurov’s powerful spurt 18:4 Krasnoyarsk returned to the game.

The three-points shot by Taylor for 32 seconds before the end could be a decisive moment. Jones soon answered buy the same shot, but it seemed that “Loko” didn’t have a chance to save the game. The team made tactical foul when 7 seconds were left before the end. “Enisei” failed to realize the free throws. Matt Jenning picked up the ball after the second miss shot, Sasha Obradovic did not take a timeout. Kuban swingman took the lead, taking advantage of his main weapon – 3-points shot. Jenning realized the shot when a second was before the end and brought the “Loco” forward. Vasily Zavoruev couldn’t save his team by his shot. 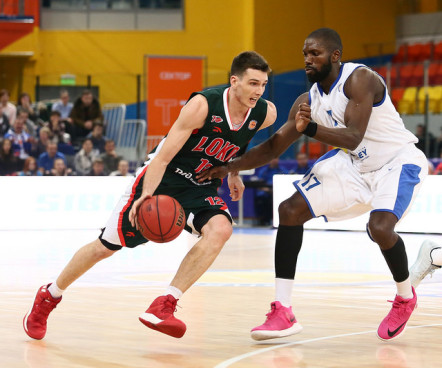