In the first game of Kondrashin and Belov’s Cup, which started in St. Petersburg, the Russian men’s team took over the team of Finland – 91:75.

Dmitry Khvostov, Vitaly Fridzon, Nikita Kurbanov, Andrei Vorontsevich and Timofei Mozgov appeared on the court in the starting five of Russians. And they pretty quickly created a good reserve – 7: 2 after two minutes.

But the Finnish players did not give up so easily, showing the Russian team their main weapon – three-point shots. The Russians lost the starting quarter with a score of 21:25, and the second was started with an effective attack of rivals. Only closer to a big break, the Russians seized the initiative. The ending of the first half was marked by the first points of Timofei Mozgov (of course, from above) and a prolonged series of free throws shoots where the players of Sergei Bazarevich were slightly more lucky – 42:40.

In the third quarter Vorontsevich and Mozgov ended three attacks in a row by their shoots – 49:40. At the 29th minute, the guests reduced the gap to two points (59:57) and had a chance to equalize, but made a loss. The end of the period remained for the Russians – 64:57.

In the last quarter there was no struggle. For 7.04 before the final siren the advantage of the Russian national team became double-digit (72:62). Team Finland still tried to “snap”, gaining 6 points in a row, but Russian team could not stop. 91:75.
On Sunday, August 6, at 12.30 Russian national team will meet with the Israeli team in the second match of Kondrashin and Belov’s Cup. 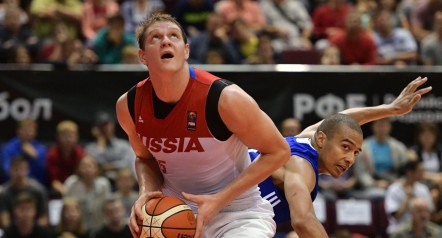