The Russian team beat the Greek team in the quarterfinal match of the Eurobasket, becoming the third semifinalist of the tournament.

In the first quarter, the confident game of Nick Kalates allowed the Greeks to draw a gap of 7 points. Before the start of the second quarter Greece led in the score – 24:17. In the second quarter, the Hellenic gap reached 13 points, but the efforts of Mozgov and Fridzon managed to reduce the gap slightly. The teams went at the big break with the score 37:31 in favor of the national team of Greece.

In the third quarter, the Missus team once again began to build up the advantage, at some point breaking away by 11 points, but the shocking ending of the quarter from Alexei Shved allowed the Russians to equalize the situation, and before the last break the score was 53:51 in favor of Greece.

In the final quarter, Russia came forward. In the future, despite the efforts of the Greeks, Bazarevich’s team managed to increase the advantage a bit. In the nervous ending the Russians managed to keep the victory, the score of the game – 74:69.

A double-double from 15 points and 10 rebounds was made by the center Timofey Mozgov.

In the semifinal match, which will be held on September 15, the Russian team will play with the winner of the pair Serbia – Italy. 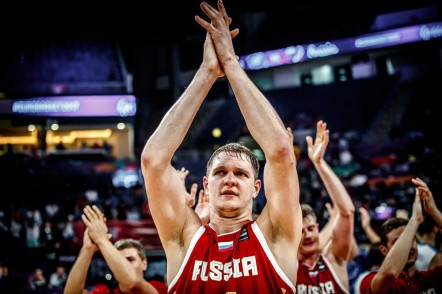