“Zenit” played with “Lokomotiv-Kuban” in St.Petersburg in the second match of the Eurocup quarterfinal series. After the defeat in the first match it was necessary for blue-white-blues to defeat the opponent to return the series to the south of Russia.

The beginning of the game was similar to the start of the match in Krasnodar. “Lokomotiv” deployed its lethal attacks, which almost all without exception ended in successful lay-ups. In this situation, the leisurely style of the opponent even helped “Zenit” a little – Loko did not hurry to bring advantage to the devastating. But the fact what they got was catastrophic – 10:25.

In the end of the first half, “Zenit” managed to make good defense, and Karasev Jr. made several successful shots. Despite this, according to the results of 20 minutes of the game, “Loko” was led by 29:44.

Three-point shot by Karasev, who scored 20 points in the game and “collected” 7 fouls on himself, allowed “Zenit” to establish a difference of -11 after three quarters. The guests won 56:67.

For “Zenith” which strategy is attack, such a difference did not look like a verdict, but as during the past seven quarters of the confrontation, “Loko” did not give any weaknesses in the defense. It did not allow many things to the opponent this time. As a result, 77:88 – blue-white-blues stop their performance in the Eurocup at the quarterfinals and will now concentrate exclusively on the VTB United League. 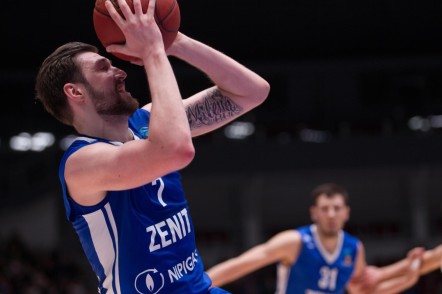