Janis Timma recognized as the most valuable player of the Eurocup 10 round. “Zenit’s” forward scored 33 points and made 10 rebounds in the match with “Unicaja”.
“Zenit” played with “Unicaja” at home at the final match of the Eurocup first stage. The result of this game would define the final place of blue-white-blues in the group. Victory would give the first place to St. Petersburg team, while the defeat left “Zenit” on the third place.
10 minutes before the end of the regular time the score was equal – 53:53. Timma was the leader of Zenit’s attack, he repeatedly took the game over and spent on the court even more time than the guards of blue-white-blues.
When 52 seconds were left before the end Timma’s 3-points shoot (he realized 7 such shots) led the blue-white-blues ahead – 75:86. Finally Fogg, who has lost his nerves, and he made unsportsmanlike foul on Sergei Karasev (he returned to play after injury).
As a result, 82:72 – victory of “Zenit” and the first place in the group. 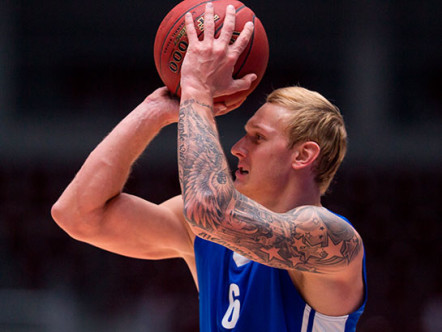