“Khimki” in the first match of the quarterfinal series of the playoffs on its site defeated the Krasnoyarsk “Enisey” – 91:84.

An easy victory over “Enisey” in the last round of the regular season set the hosts on an optimistic mood. In addition, Krasnoyarsk suffered personnel losses. But despite this, the initiative in the debut was captured by the guests. A quick transition from defense to attack, a good percentage of the realization of long-range shots (54% – 6 out of 11), as well as the dominance of Frank Elegar and Suleiman Braimoh (21 points and 14 rebounds for two up to a long break) allowed “Enisey” to hold the lead on throughout almost the entire first half. But the yellow-blues equalized the score to a big break – 44:44.

Fantastic game of Alexei Shved was a key factor in the victory of the Moscow region team. In addition, the unsuccessful execution of free throws became one of the main problems of the players of “Enisey” in this game. 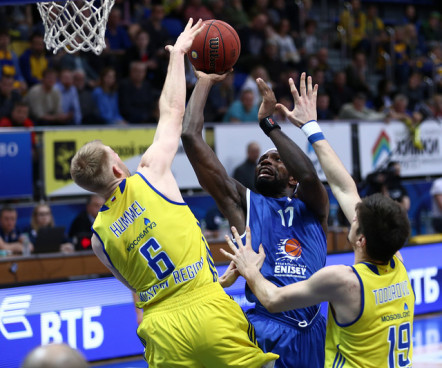